I’m extremely grateful to the owner, Seth, for giving me the opportunity to build this permanent sacred stone structure. It was the first commissioned labyrinth and the first permanent stone labyrinth.

It seemed fortuitous from the start as I was randomly introduced to Seth at a local AGM for the two Biodynamic farms of Plaw Hatch and Table Hurst in Forest Row, East Sussex. I was looking for a place to build a stone labyrinth from which to set up courses and workshops on nature connection. Seth had land and was looking for practitioners who wanted to set up there practices from. It wasn’t until Seth sent me an email that I realised it was the same place that Julie Wood, my ‘work colleague’, had made a connection with 42 acres about growing herbs for teas and had mentioned that they may have been interested in a labyrinth.

‘The Hermitage’ is home to Seth as well as being the business side of 42 acres retreat centre, the two are one entity. It is also fast becoming a farm with 24 shetland cattle, 15 kaki Campbell ducks, bee’s and a hell of a lot of salads, vegetables and fruits grown lovingly among the Hermitage walls and land. There is a courtyard of buildings surrounded by woodland, a lake and fields, the project is quickly growing with its main emphasis being on facilitating a connection to nature and the self.

Upon my first visit I was taxi’d up to the woodland by Seth via the Hermitage’s vehicle of choice, an off road electric buggy that bipps along at quite a speed. As we pulled off of the track we were met by a large pile of stone covered in green moss, A gorgeous local Somerset Stone, which was a mixture of sandstone and quartz with beautiful coloured pigments of blues, pinks, reds and greys depicting the many layers of mineral content. 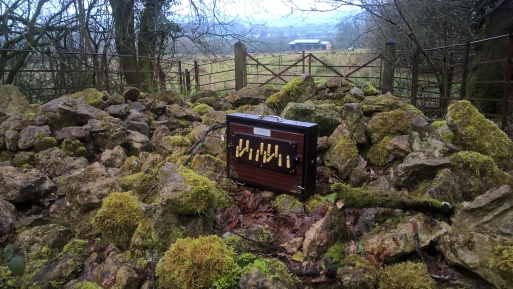 The first week I spent connecting with the stone and tuning in to the site. I was particularly taken with the stone and would sit singing to it with the shruti box day after day. I was then informed that it had come from the courtyard itself, literally a stones throw away from where the labyrinth was going to be placed. The outbuilding had been knocked down and discarded up in the woods. At the time I had just finished reading a book called ‘Voices of the first day’, Awakening in the Aboriginal Dreamtime, by Robert Lawler. In it he describes the story of when he was walking through the financial district in Sydney, Australia, when his Aboriginal friend turns to him and says, ‘You see these buildings here, from a western perspective you see only that the architects, builders and designers have created these buildings but from an Aboriginal view point we see that the stone too contains a dream within it.” He then goes on to explain that the stone contains the very same elements that exist within the builders, architects and designers; calcium in our bones, Iron in our blood we are made from the very same Earth. Is it then so far fetched to know that the same life force that animates us is also responsible for creating the stone. In fact when you think in terms of time, stone is by far the oldest thing on the planet. If stones could talk aye…

After initially dowsing, tuning in to the site, following intuition and correspondence it was time to start marking out. You can see the seed pattern marked with flour. After the second day of buying Budgens out of flour I bought some environmentally friendly chalk spray to finish it off.

You can see the top right L of the seed pattern is slightly further over to the right, this is to allow for a larger centre.

The wooden Dowels are to denote the distance between the paths and ‘walls’.

Below is a slightly vague step by step picture process.. I’ll soon be making a document on how to draw a 7- circuit labyrinth, once you have this you can apply it to any material.

Left – The Labyrinth all marked out before.. Below – Digging down 6 inches which turned out to be more like 12 inches.

I’d marked the centre point by leaving two stakes in line with the centre at either end and keeping note of the measurements. I’d also left a centre pin in but not expecting it to stay there, my assumption was right. 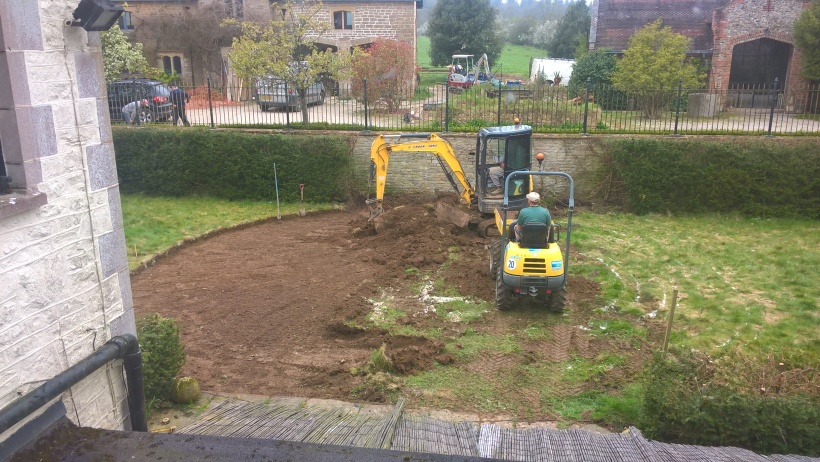 Next up was the hardcore to go down. In the picture below you can see the Whacker plate which is used to condense the material. Oh and its worth putting down a decent weed membrane before you put the hardcore down. You can see the edges of the white membrane poking up around the sides.

Then came the fun part of laying the stone but not before marking out the labyrinth once again on top of the hardcore. 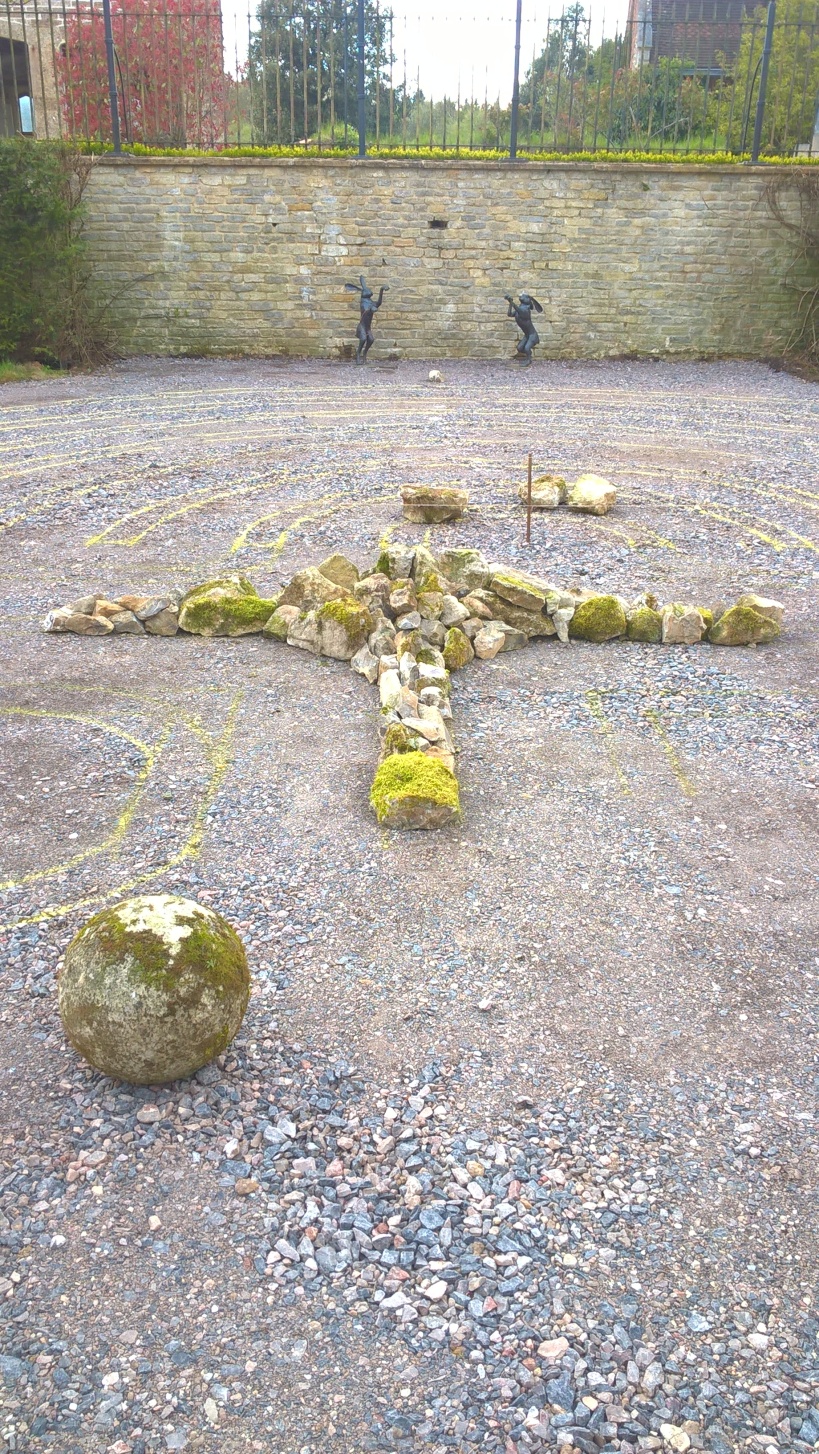 Seth wanted to have a bare foot experience in the labyrinth so we decided on sand. You can see gaps in the ‘walls’ at this stage to the right and left so that I could wheel barrow the sand in without having to walk the labyrinth every time.

Above you can see the stone slabs around the outside which were bedded on to cement.

And finally the compost with planting around the slabs. The plants were lawn Chamomile and Soleirola (mind your own business) both low growing for easy to walk on access.