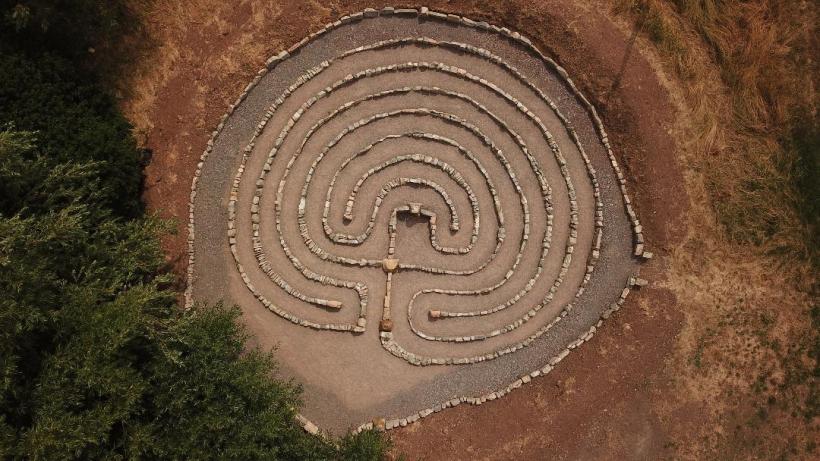 Thanks to Penny’s Son, Tom Horne, for this great aerial shot! Drone tech.

The Langport Labyrinth is at Wick Farm, Just outside of Langport, Somerset, UK. It no longer functions as a working farm. The owner, Penny Horne, is very creative with the space, with many creative art projects and gardens. She has recently started to allow the land to Re-wild, taking down barbed wire fencing so that animal, such as the deer, can access easily without injury and leaving the grass to return to meadow. Allowing the land to re-wild re-establishes habitats that have been destroyed and encourages diversity of species. We are currently seeing a mass extinction on the planet, loosing species at an alarming rate. These small Oasis’s on the planet act as ‘landmarks’ and future blueprints for others to follow.

A large hillside runs along the property with a woodland of many native species. Upon first viewing of the site the hillside was a strong prominent feature to the land. Other characteristics were a pond and willow trees behind the suggested area for the site. Penny had suggested a spot but was open to where the labyrinth might wish to be placed. The spot was already being used as a fire pit and had large carved wooden seating around it in a circular shape. To me, this said that the spot had already drawn people to to that area and a sacred space was created around fire. Dowsing confirmed the spot to be suitable, there were no ”sha” lines, (underground water lines of negative energy) and there appeared to be a strong energy ley running along the path right next to it. I’m aware that lines will automatically begin aligning to large stones or places where people are consciously harnessing energy. You can also call in lines with your intention. I recently learnt that dowsers associate labyrinths with attracting water! Most interestingly once the labyrinth was built a dowser detected a really strong underground water source crossing through the entrance of the labyrinth and off up the to the Hill, probably coming down from the hill? 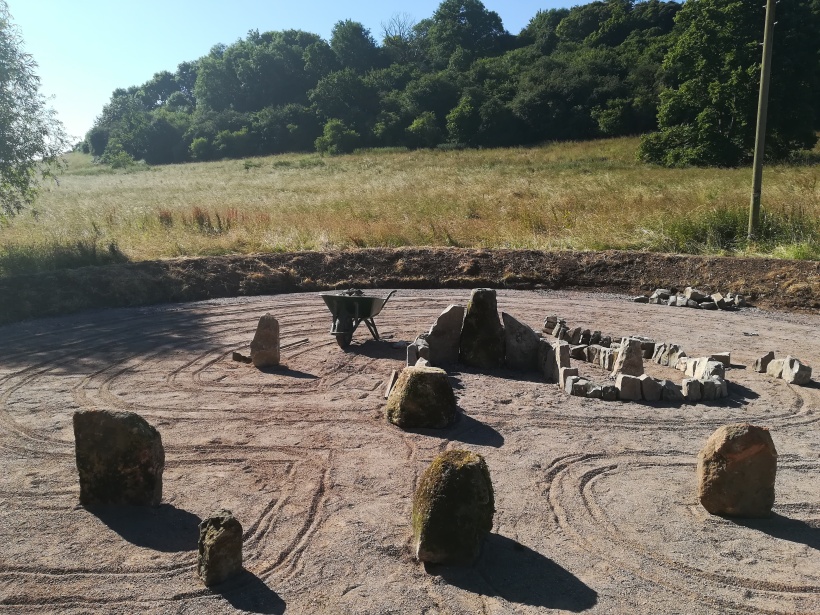 Hillside behind the labyrinth. Not the best photo to get the impression of the Hillside.

The Hillside, In Geomancy or Feng Shui, would have been known as a Dragon Line, any high points where the Earths plates have risen to form, hills, mountains or ridges there is a masculine yang energy to them. In the evenings I started sitting on top of the Hill, over looking the Mendips, and communed with the land. I had already asked permission on first visit, though I get the sense these labyrinths are already in blue print at these places well before I have any knowledge of it. I asked again for permission from the land to build the labyrinth here and asked the land to be involved and to offer its healing to the people that would walk, as we heal ourselves we also heal the land (or the whole) that we are apart of, remembering there is no separation. The labyrinth is also an offering to the land, the labyrinth is a healing sacred space. Making offerings creates a relationship, a two way flow of communication begins to happen as consciousness speaks to itself. I find the Offering of song via the shruti box the most enjoyable and responsive way to communicate. Herbal traditions across the world say the best offering you can give is your voice. In offering a song from the Shruti the words arose how do you heal? It was aimed at the land, as in how does the land heal itself?

For the next two weeks I couldn’t step outside the caravan I was staying in without seeing a snake! They would hear me or feel me, snakes feel vibrations through their underbelly, before I had any idea they were there and then I’d catch site as they slithered away for the closest cover. The second day I was clearing the site and heard a rustling in the grass, I went over to investigate and found a metre long snake skin freshly shed, still warm, the snake had slithered out of it and in to bushes! (((shudder))). I’m not completely terrified of snakes but I’m also not exactly thrilled by them either. Thankfully these were grass snakes, not poisonous, and they never came towards you and were always quick to get out of your way. I’ve never seen so many snakes! I can only remember seeing an adder once in the wild, the wilds of the Hayling Island Billy cycle track, where you could sometimes catch a glimpse of a sunbathing serpent.

Snakey, snake mcsnake. This was the largest, almost a metre, 10! In the compost, eggs as well. None were hurt though wasn't so impressed to see two disappear under the caravan. Found out they are apparently grass snakes though, at least not poisonous.

Heard a rustling in the grass and found this freshly shed adder skin in the labyrinth site. #animalsymbolism#snakeskin#adders#rebirth#healing#rewilding#earthmedicine. The snake shedding skin represents many things, here I see at as rebirth, renewel, rejuvenation, transformation and deep healing.

After the initial groundworks were completed it was time to start moving the stone which was situated next to the caravan and behind the compost. Unfortunately we were quite sure that this was where the snakes lair was. haha.. We removed the compost with great care making sure not to harm any snakes, sure enough we counted around 10 large grass snakes along with a cluster of eggs. I didn’t get the best of sleeps that night as I watched two large grass snakes make their way underneath the caravan.

So the Serpent energy carried on coming in.. Whilst laying a section of the wall I received what felt like the answer to the question I’d asked the land, (when I say land, I mean all of nature; the animals, plants, air, water and even us!) The stone began to snake, getting thinner and weaving like a snakes bodily movement, then I could see the ridges or spines of the landscape within in the stone which looked like a dragons back, it echoed the vertebrae of the human spine too. 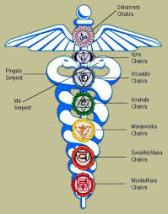 Apparently its the Rod of Asclepius,

a single rod with single snake, which is used for the symbol of medicine but the caduceus symbol is often used as well. The Rod of Asclepius is still used today for the ambulance service and many medical organisations. The Rod of Asclepius takes the name of a Greek Deity associated with Healing and the medicinal arts.  The snake symbolises many things but to me it was talking most strongly of Death and Rebirth, the shedding of the skin, Primal Energy, Healing and Transformation. This primal energy is the energy of consciousness that is running through it all! This is how the land heals. It is the coiled serpent which sits at the base of our spines which when ready climbs our vertebrae igniting our chakras. It is the serpent lines, ley lines, energy lines that are the Earths meridians. An Earth grid tapestry which snakes around the globe. When these lines are healthy and flowing the Earths energy body is well, just like in the traditional Chinese practice of acupuncture, it is the energetics that are primary to the physical health and well being.

I’d felt that this labyrinth was somehow connected to the first labyrinth at The Hermitage but there were no solid threads on this. Whilst building the Hermitage labyrinth I felt there would be another labyrinth somewhere that was connected. So when Penny turned up one day on a foraging course and said she wanted a labyrinth I thought Ohhh right…I’m going to build it. However no threads appeared and no logical connections were formed to say the two were connected. Nothing synchronistically flowed to encourage this idea. I wrote to the dowser and labyrinth master Sig Longren who shared that they were already connected as everything is connected but to enhance the connection you could place two stones at either labyrinth which pointed in the direction of the other. I was keen at the time to hold simultaneous walks with the same theme at the same time to create a communication between the both but I feel it is best to go with the flow and that doesn’t appear to be flowing right now, perhaps in the future. It would make an interesting experiment.

For now my self and Julie Wood are planning for one day Plant spirit Immersion workshops using the labyrinth at the Hermitage and I hope to run a retreat at the Langport Labyrinth next year.

The Langport Labyrinth can be visited by appointment by getting in contact with Penny through the labyrinth locator – https://labyrinthlocator.com/locate-a-labyrinth?labyrinth_id=&action=locate&organization=&lastname=&city=&state=&postalcode=&country=&radius=&availability=&situation=&material=&type=&designer=&builder=Mark+Willenbruch&submit=Search.

I hope to upload a short film soon that was made during the build by Base Gamble. Below are some images through the stages of the project.

marking out the labyrinth, after the digging out and landscaping. The centre stone is a large Staddle stone which were used to lift granaries off of the floor. https://en.wikipedia.org/wiki/Staddle_stones

This amazing fossil was found within the stone. Predicted to be 200 million years old by Labyrinth historian Jeff Saward. http://www.labyrinthos.net

The theme, inspired by the serpent, on the opening night was Transformation. Walkers wrote something they wished to let go of and transform in their lives and then placed them in the huge Tibetan Tara gong and (((gonged))). We then burnt them. 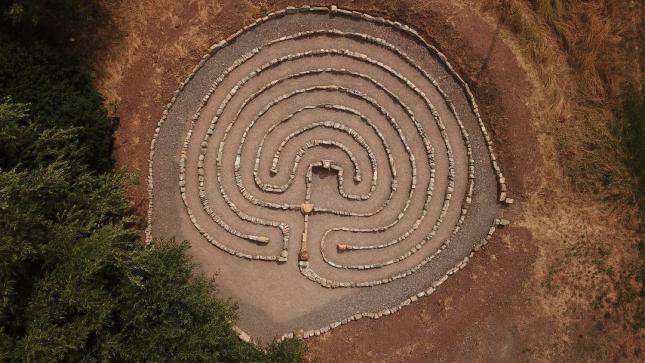