The Herb Labyrinth project was Inspired by a Permaculture Herb Spiral and the ancient symbol of the Labyrinth. The design will utilise the Four directions and the Four elements in correspondence to the healing plants and in relation to the actions the plants have on the human body as well as the effect of walking the Labyrinth has on a persons well being and potential for inner transformation.

The following describes a step by step process of how to create your own.

You may need – >15 sticks/bamboo sticks. > Measuring tape > String > Flour/Sand something to mark out the path. > Spades, wheelbarrows, mulch, helping hands, feet and herbs.

1. Find a piece of land big enough. This area was in amongst an orchard and just about big enough for a Labyrinth about 26 foot across. Any smaller than this and it may take away from the quality of using it for a walking meditation. Labyrinths are walked to slow the mind and centre one self, if the path is too short it may hinder this.

The Above location is an Apple Orchard at Tuppenny Barn Organic Farm in Hampshire, UK.

2. Measure the area and find the centre point. Once you have the centre spot put a stick in the ground and attach some string this will help you mark out the circumference of you circle, It doesn’t have to be an exact circle. Place sticks around the perimeter of your circle to denote the edge leaving enough space for herb beds around the outside edge if that is what you are going for.

3. Now mark out the beds or the path, I chose sand as I had some bags of it lying around and its not toxic like using a spray on the ground, flour would also suffice. I decided to mark out the beds, it isn’t exact but gives me an idea where things will go. Its quite an organic process and as you work you will decide to change things as you go.

4. You can now begin to dig out the path ways turning over the cut turf on to the beds upside down. The grass will die off adding a layer of nutrients to the soil. You could add further layers of cuttings and mulch to enrich your beds.

Lydia cutting out the path and turning it over to form the bed on her left.

You don’t need to be too accurate with your path and beds, what ever best suits your needs. Bare in mind what your labyrinth/Herb Spiral is being used for? you might need to take in to account the location? materials? what your aims are? who’s going to be using it? what will it be used for? We have made adaptations along the way, for example we decided to create a gentle gradient on the path, reaching a higher perspective as you walk in to the centre. This also has an impact on the planting, creating variant changes to the climate within the Labyrinth. I was unable to work for a month and on return the plants that had grown in specific areas were noticeably different. The South was drier, sparse and smaller plants in comparison to the North end. Plants in the South included: Lots of Fat Hen, small Thistle, Plantain, Dandelion, Fumitory. Interesting that most of the plants have a use for the liver. I wasn’t sure about Fat Hens relation to the liver but just found that it is used in India for liver complaints. North: Plum tree runners from the Orchard,(West to North), a vine with marsh mallow type flowers (pink and white) Not sure of the name? Lots of Yarrow, Clover, Grasses. Much thicker, lush coverage in the North side.

Building up the Gradient in to the centre.

A month after returning you can see the difference here with the South side on the right and North on the left. 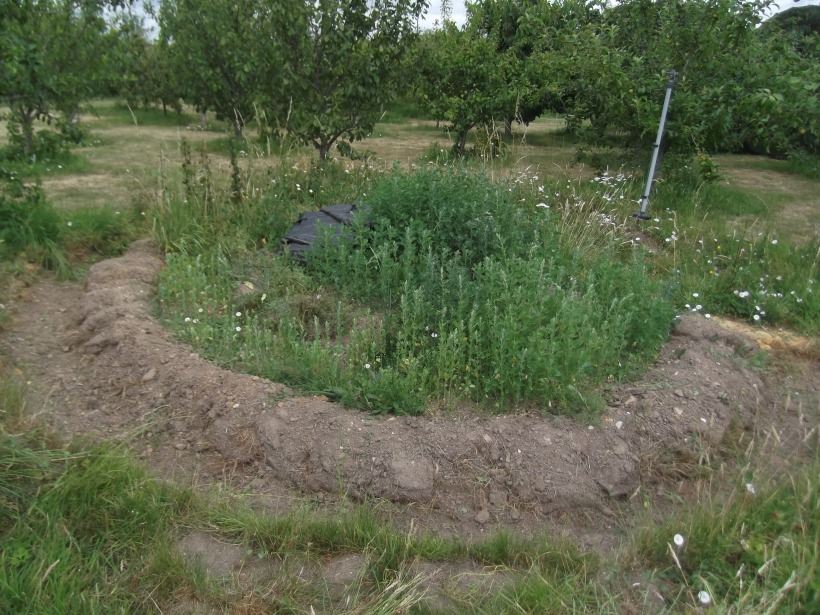 This has been an awkward project in that I live 2 hours away so sometimes it has been a few weeks until work commences giving nature a chance to re-establish. We were originally going for a material membrane to keep weeds under control but while attempting to lay it down we realised it wasn’t going to work in relation to the contours of the beds/paths, it wouldn’t have sat evenly and would have risen up being exposed (Not a good look) and wouldn’t have worked in prevention of growth. We have now decided upon mulching with wood chip that we access to on the land.

The next step will be to mulch the paths and beds, possibly plant some over wintering herbs? and cover for the winter ready for a Spring planting. Thanks for reading if you got this far and any feedback is much appreciated. I’ll be posting up more from our upcoming sessions in August/September.