This Autumn I found my self on a last-minute trip to visit a friend in the foothills of the Sierra Nevada Mountains, Southern Spain. My plan was to be in Wales for the month of October but life decided a different mountain range was on the cards. A day or so after my plans had fallen through, my good friend Nick phoned from Spain for a chat, we had previously talked of a visit in Autumn so now seemed like the perfect timing.

I’d arrived at a difficult time for Nick and his family. Rather tragically Nicks baby daughter, Freya, had been taken in to hospital since our phone call. I traveled to the hospital with Nicks partner, Anne’s, Father to see them after staying in their mud hut for a couple of days with a field full of student midwives…more on that later. 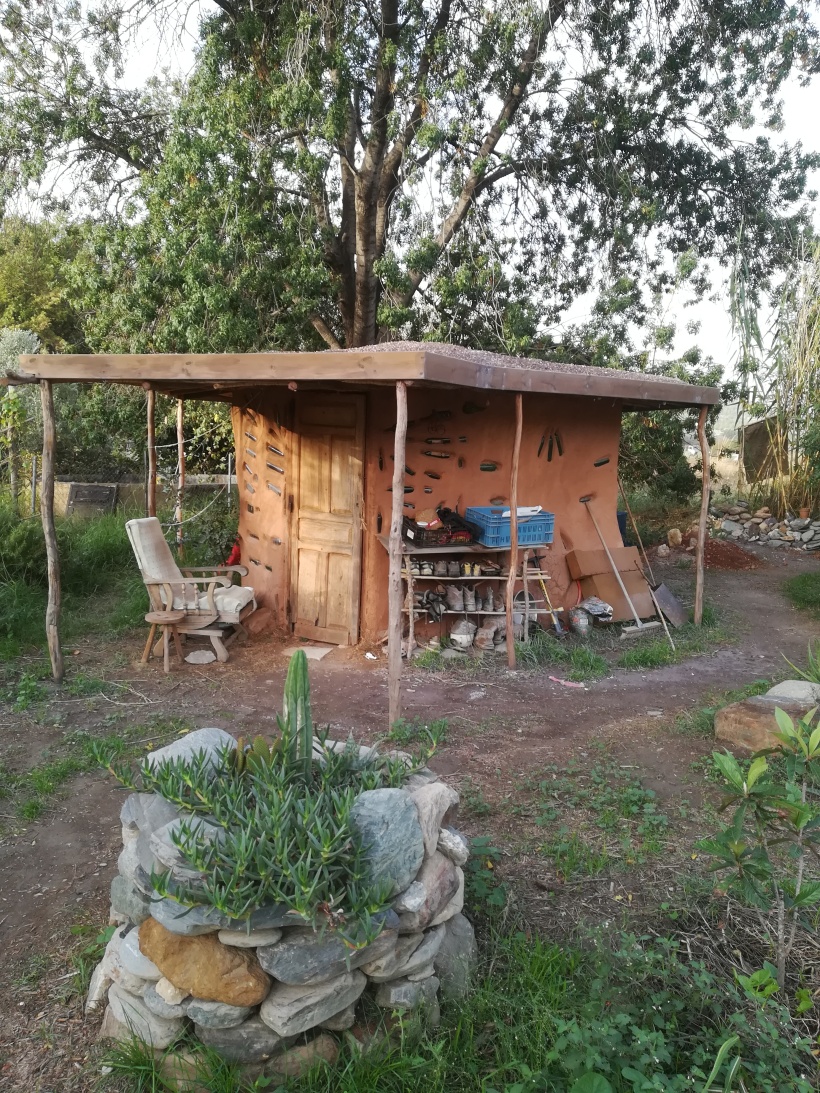 Freya had an operation on her stomach and had been in intensive care, though upon seeing her you wouldn’t have guessed. I’m not one for babies to be honest, they’re alright, I’d rather have a dog. Freya on the other hand was delightful, I’ve never met such a content child, I kept telling Nick she had a great temperament… 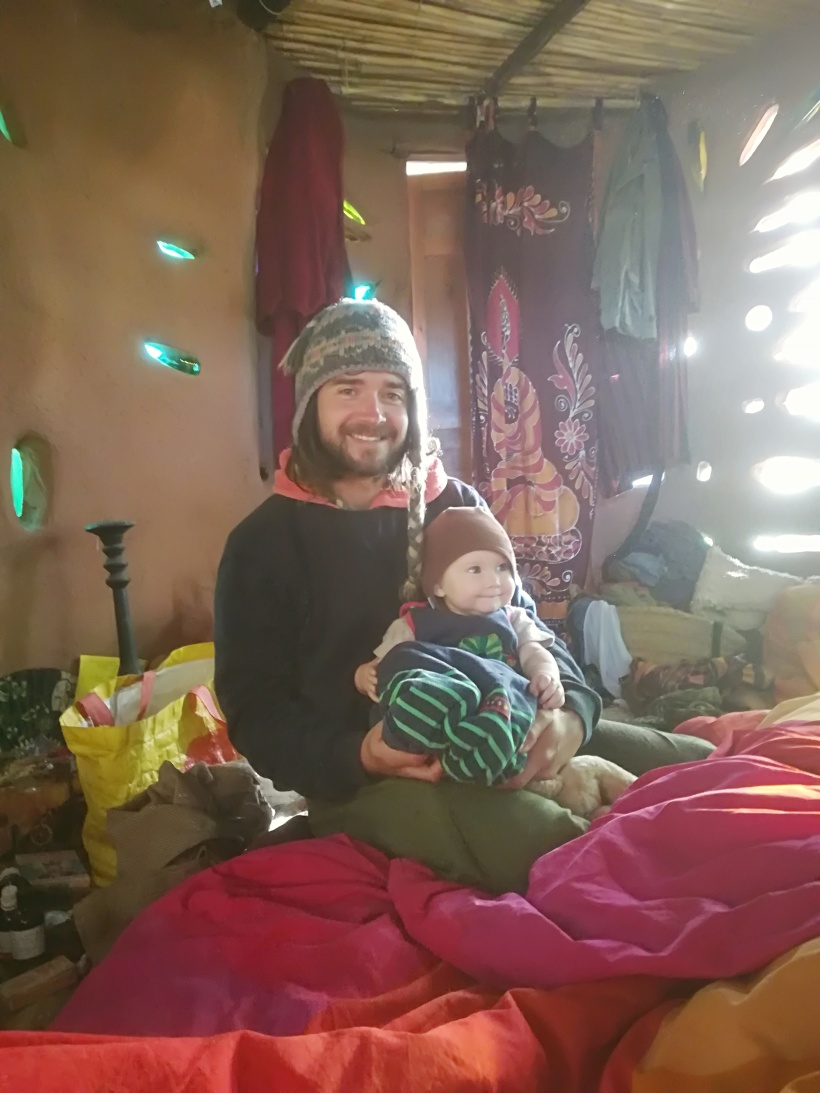 So Nick and Ann’e met while Ann’e was studying at the Da A Luz midwifery school – https://daaluzoasis.com/ – Here’s a snippet from their webpage.. quite amazing work I think you’ll agree – We will take studies back to a basic wisdom. Living on the land, nurtured and inspired students and teachers will flourish from the earth up. We have gathered the sharpest, most passionate minds in midwifery to create a centre of wisdom away from modern medicine, protocol and insurance issues which stop true midwifery from flourishing as a profession. Rather than fighting a non functioning system, we are creating a new paradigm…….. Starting afresh.

Since then Nick has bought the piece of land where the student midwives stay each year and where Ann’e had built their off grid house/hut. Living in community with both temporary and permanent residents. There’s between 10 -15 tents, trucks, caravans and huts on the land, with the main purpose being accommodation for the students. There is a communal library / come kitchen (old truck) a tool shed (old van), compost loo, playing field, vegetable growing field and lots of olive tree’s and herbs growing in and around the field along the river bank. Washing is done in the river and spring water is collected for drinking. Life is rewarding yet tough.

The first day of my arrival I was invited to the ‘El Rastro’, a hippy flea market in the small Town of Orgiva. Myself and two of the student midwives had set off walking along the river. As we strolled along chatting I asked how they were finding the midwifery school and what they were doing, Esther, announced that she was going to be doing her final project on the labyrinth!!! Of course you are I thought… Nick had told me there was an overgrown labyrinth next to the midwifery School a while ago and I had heard of labyrinths being used in the process of childbirth for meditation and as a tool during labor, but still… It never ceases to amaze me, the way in which the labyrinth persistently turns up.

Below: The amazing book by Pam England on using the labyrinth in childbirth. 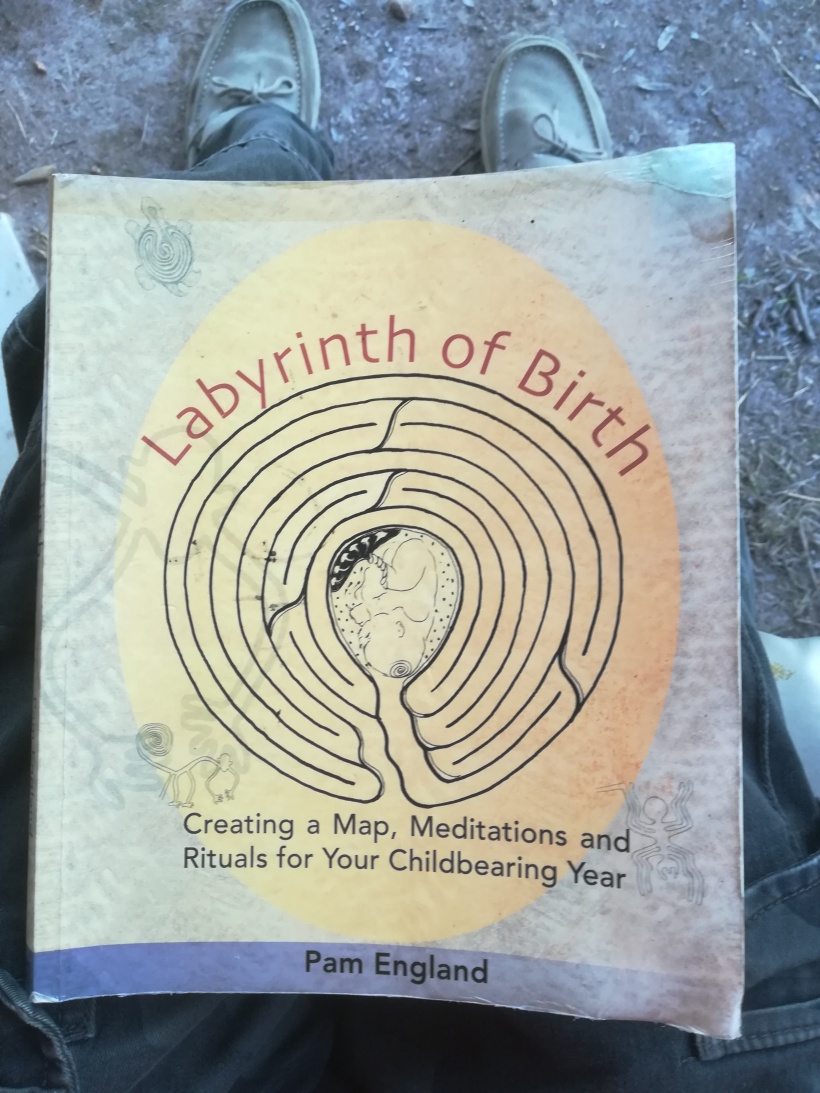 I thoroughly recommend it for all labyrinth enthusiasts. It has some beautiful illustrations and some epic wisdom on ways of using the labyrinth in the journey of pregnancy and labor. I love the way the labyrinth winds its way in to so many areas of life. 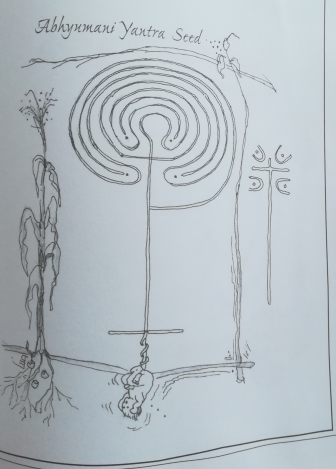 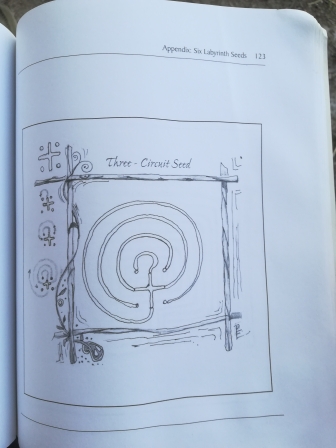 Above: A couple of cool illustrations from the book, its filled with these wonderful pen and ink examples.

There is a fascinating account in the book on midwives using labyrinths 500 years ago in Cornwall, UK for healing. It says that English midwives and healers in Cornwall used labyrinths to guide them in their healing work. When people came to them with questions about life or in search of healing, the midwife would hold the persons question in mind, and hum whilst tracing their finger around a labyrinth etched in slate. Tracing the labyrinth drew the midwife in to a receptive state of mind where she could see what was needed. When the midwife died, it was customary for her to hand her labyrinth down to her apprentice or to bury it with her.

Above : A beautiful double Rainbow appeared over Dragon Mountain.

The Mountain at the end of the valley in Cigarrones is known as Dragon Mountain. As many of you may know mountain ranges are known as dragon lines, I wasn’t surprised to be hearing tales of Dragons not before long. It started one day when a couple of us were sat having coffee in Town, our topic of Dragons was simultaneously being shared behind us when we overheard a couple talking of their experiences in the surrounding mountains, the lady informed us that she had been working with the Dragon energy for a while here and the mountains were full of them! I view dragons in a couple of ways, I see them as energy, energy from the magnetic fields of the Earth and the fire which has formed the high peaks, mountain ranges and hillsides as the Earths plates have risen with tremendous force. Magnetic fields as well as other energy forms are given off from water ways and magma flows within the earth. Also as a type of elemental being, the two are the same thing I guess. The elemental ‘being’, being a part of the whole, in the same way that when we work with a plant spirit, we are working with the collective whole of the plant and the elementals are a part of the plant. I think we are perceiving spirit through our bodies filters, so for us we may perceive a dragon shape for that particular being of energy. Interesting to note that the image of a Dragon is clearly depicted very similarly all around the world, from China to Britain and in the creation myth stories of indigenous cultures across the globe.

This is the second time working on the land that Dragons have come up this year. The first time was during the labyrinth build in Langport . After sitting on the hillside and asking the land the question of how it heals? the serpent energy was the main response that came through loud and clear. I wonder whether the sleeping Dragons are waking up within the land?

Upon asking the river and land if there was a message to be received? or something it needed? the following situation arose which began with the talk of Dragons in the Cafe.. The next day Nick and I decided the labyrinth could do with some TLC, it was built by a lady named Tess Jennings who created it along with helpers during one of the Dragon Festivals a few years ago. I’ve not met Tess but I had heard of a woman who used to go around Festivals building Labyrinths, I’m pretty sure it will be the same Tess.

Nick and I didn’t want to use a strimmer on the labyrinth and we were gifted a Scythe by a friend of Nicks who we had called in on before knocking on the door of Andy, who owned the land where the labyrinth lay. Upon asking Andy if it was ok to ‘tidy’ up the labyrinth he said yes but as long as we didn’t use a strimmer, just hand tools, we told him we were already on it. I understand the need for practicality when using machine tools especially on larger jobs but I’m becoming increasingly more aware this year that it is jarring for the living environment. I guess it is the equivalent of somebody cutting your hair considerately with scissors or someone roughly hacking away at it with clippers.

Top: Labyrinth before.   Middle: Nick with the shears.   Bottom: After a trim 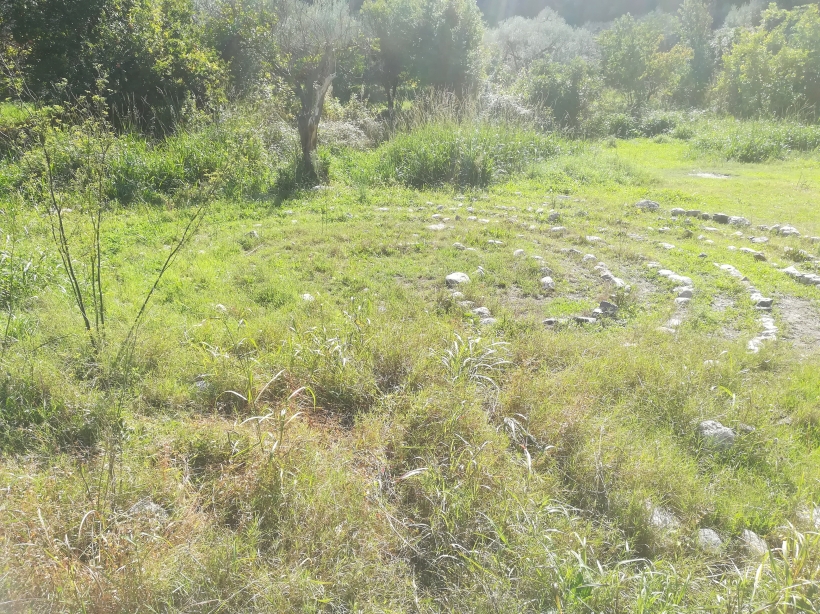 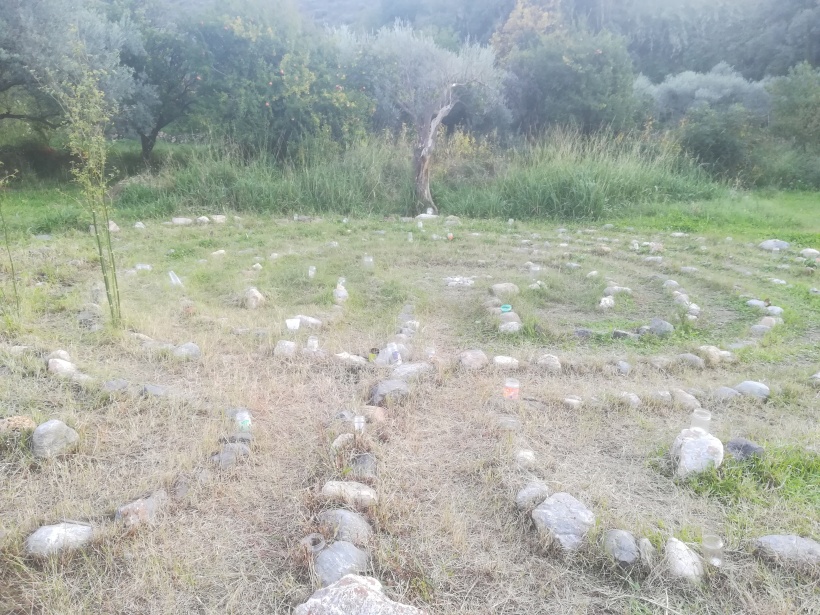 Unfortunately the photo’s of the candle lit labyrinth walk didn’t come out. A couple of mornings before the walk I’d woken up with the idea of collecting stones from the river bed for people to carry in to the middle of the labyrinth, each of us could place a stone in the centre as an offering to the land and create an image which perhaps held some meaning? On the evening of the walk a large crowd from the community gathered, kids were busy running and playing in the labyrinth, ultra enthusiastic to help light the candles, I didn’t have to light a single one! Speaking to Andy before the walk I told him of the idea to honour the land and place a stone in the centre and he told me that a couple of ”Shaman” had visited the land and had said that the labyrinth needed to be re-assigned a new identity, they decided to realign the labyrinth to the land and the community, By asking the land / river and Mountain that day what was wanted or needed I believe that this was the outcome. There were many gorgeous personal experiences during the walk; Nick’s friend Sebastien, the Scythe owner, had missed the end of the introduction and had stepped on to the labyrinth without taking a stone, I followed on after him, I wouldn’t usually walk if I was holding the event but felt compelled to in this instance, I followed after him and considered telling him to take a stone but decided to leave it be, as we rounded the corner next to the bucket of stones a young girl, Aluna, who I’d estimate is about 2 years old, was coming round the corner with her Mother, she stopped at the corner and we all stood there ushering her past us, calling her and gesturing her to move on but she just stood there looking at us and saying something we couldn’t hear, then she took a stone from the bucket and gave it to Sebastien!

After we finished a couple of people shared that they felt the presence of people who had passed that were connected to the place, we then realised it was a day after ‘The day of the Dead’ celebration in Spain. People felt very close to their friends and felt them there alongside them.

I felt really thankful for the opportunity to participate and help create that evening with such a strong spirit and lovely community.

After returning to the UK I went to a talk by Mac Macartney, founder of Embercombe, who has just released a book called ‘The Children’s Fire’, about his pilgrimage to Anglesey from his birth place in England. The Children’s Fire is a teaching of the elders of ancient America. They made a pledge to the welfare of unborn children, both human and non-human: No law, no decision, no action of any kind shall be taken that will harm the children seven generations hence. Very poignant at a time when thousands of people are on the streets of London for the demonstration of Extinction rebellion.

Below is the image that was created in the centre by everyone that walked, no mention was made as to any theme, just to add your stone to the centre, an interesting image I’m sure you’ll agree. Some people likened it to a womb and ovaries which I feel was very apt. It made me consider the symbolism of child birth perhaps to take as a symbol of what we are birthing in to the future, for the children of tomorrow.

below : Image created in the centre of the labyrinth. 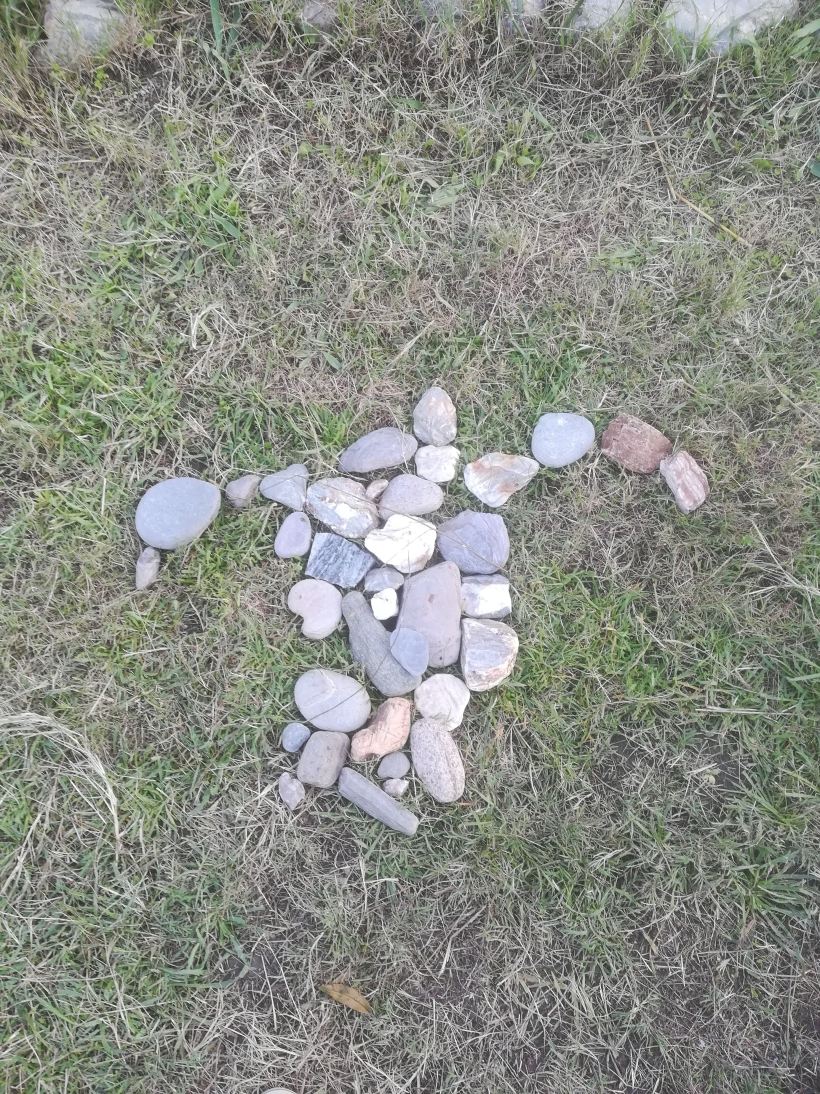 2 thoughts on “Children, Dragons and Labyrinths.”